ON THE ROAD SEASON 2

The second season of the hit series, On the Road in America, follows Lama, who grew up in Saudi Arabia, Sara from Lebanon, Bash from Egypt and a Palestinian refugee, Joseph, on a cross-country road trip to learn about American culture. Their journey begins in Los Angeles 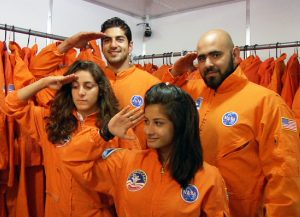 and continues to Washington DC via the Southern route; each episode provides context for exploring relevant issues such as capitalism, Western expansionism, religious diversity and racism. The cast sees and experiences what they have asked to see: Lama wants to meet the homeless and the poor, Bash wants to meet a Jewish family and party in Las Vegas, Sara wants to sing and perform on stage, and Joseph wants to meet the equivalents to the Palestinians in America – the Native Americans and the disenfranchised residents of urban projects.

The second season aired several times on MBC1 in March/April 2010 where it was the number two rated prime-time show with an average of 8.5 million viewers. The series is created, executive produced and directed by Academy Award-nominated and Emmy-winning producer Jerome Gary. It is a Layalina production in association with Visionaire Media.