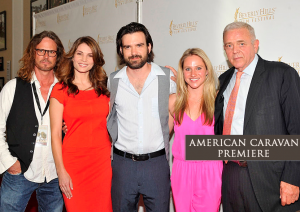 Caravan, six young Americans journey across the Middle East in the footsteps of Revolution. The narrative is driven by the cast’s quest to meet and be inspired by the Arab youth who started it all. But almost immediately, the cast’s fearlessness is at odds with the Producers’ conservative ‘safe’ plans for them; and what starts out as an exercise in public diplomacy and reality television quickly turns into a headlong collision with the Arab Spring and a one-of-a-kind story of American and Arab youth as they travel to Tunisia, Egypt, Lebanon, Oman and the United Arab Emirates. For everyone, it becomes a life changing experience wrought with high drama, danger, adventure, conflict, joy, sadness, music, and love.

Co-Directed and Edited by Shawn Thompson